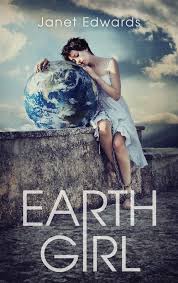 Genre: Science Fiction
Age: 14+
Description: It is 2788 and the future is much different from the world as we know it. For years people have been colonizing and “portaling” to other worlds in the solar system. Unfortunately, for 18-year-old Jarra, she lives in a different world. A world full of prejudice and disadvantages. See, Jarra was one of the unfortunate babies born in every 1,000 births to have an immune system that can only survive on the backwards planet of Earth. Born on another planet she was portalled to Earth just minutes after being born and has been abandoned by her parents. She has grown up hearing all the jokes about the people who live on Earth—they are “apes” and the “throwbacks” of human evolution. However, Jarra is tired of the stereotypes and longs to show other people that she is human too. So, upon graduation, she devices a brilliant plan. She wants to be an archeologist and has already spent years on student digs through the United States. She applies for college at University Asgard—one of the best in the solar system—which just so happens to begin its studies in pre-civilization with digs in the old abandoned New York City. She plans to infiltrate the class and show them that she is smarter than all of them combined and once she has wormed her way into their lives and won their trust she will expose that they’ve been working with an “ape girl” and they’ll be humiliated. She has to put up with a lot of challenges though—an advisor who knows her true status and uses everyone opportunity he has to get her to make a mistake in her fake “Jarra, military daughter” persona, a possible relationship with Fian, a “norm” boy, a daring and risky rescue of a trapped survey team, and the threat of a solar storm of the century that is forcing the crews of orbiting solar arrays to escape to the Earth below. The only problem? No type of spacecraft has ever landed in more than 600 years and the main ship is about to crash into their school.
Opinion: Earth Girl is brilliant. It is pure science fiction for teens which is a great thing because there really aren’t that many science fiction books for teens today. I can think of ones like 172 Hours on the Moon and Losers in Space which are pure sci-fi but others that get more readers and more attention, like the Sky Chasers series by Amy Kathleen Ryan and Across the Universe by Beth Revis, are essentially love triangles that take place aboard a ship in space. This book is well-written and immediately draws the reader into the world Jarra lives in. Edwards easily explains the rules of this new future without making the world building seem like didactic teaching of what’s been happening on Earth since 2013. In fact, readers get little hints here and there about why other planets needed to be colonized and how the people of other worlds treat each other. Jarra is a strong character. She isn’t going to sit back and let other people think that those who are handicapped and forced to live on Earth are any less intelligent and capable as the norms. She has proven herself as a great leader during her student digs and when her advisor tries to get her to trip up on her invented back story she fights back and puts him in her place. So much so eventually he begins to respect her and stops trying to trick her. I read one review where the reader said that Jarra was annoying because she judges the norms more than they judge her. The thing here is that they aren’t judging her personally because they all think she is a norm. Yes, there is some talk here and there and some bad jokes about the “ape” people but they aren’t directed at Jarra because everyone thinks she is a norm. Jarra does judge people but everyone judges everyone. Most of her class is judgmental of two teens from a certain planet known for its open sexuality that the other teens don’t understand because they all grew up in societies where personal privacy is supremely important until one is married. Even Jarra holds stereotypes about these two teens. However, when it is revealed that they have an ulterior motive to joining the program just as Jarra does (they are in fact married and in their early 20s and enrolled in the program to have an excuse to be on Earth where they are hiding their newborn daughter—an Ape child—whose existence, if found out, would cause them both to be expelled from their planet) Jarra begins to see the errors in her ways. Norms judge her people because they don’t understandthem  and Jarra holds just as many stereotypes herself of the norms. The thing that the other reader didn’t comment on is what makes Jarra a moving character and a realistic one—she sees the error in her ways and she grows for it and eventually fears what will happen when her friends find out she is not who she appears to be. I also love the archeology and history aspect of the plot—it’s nice to see a book for teens showcasing the importance of history and that history can be fun! There is also a lot of science talk, such as detailed descriptions of how to put on the protective suits the surveyors have to wear when outside, but it is all done in an interesting way that adds more depth to the world and doesn’t bog down the narrative. Give this book to teens wanting some science fiction (without the main focus being romance) and use it in book clubs (for the ethical discussions that will come up). While guys will like it to you might have to hand sell it to them since the cover features a girl. Just tell them Jarra is like Katniss in space but way awesomer.

There is also a HUGE plot twist half way through that will make you go, “WHAT?!?!?!” So good!

Here’s what some of my teens had to say:

Sarah, 15, says, “In the future, there is a girl who happens to not be able to travel to other planets because of a genetic disadvantage. So instead of accepting her fate as being stuck on Earth for the rest of her life and going to an Earth University, she defies all odds and applies to an off-world university for an archeology program that happens to begin with digs on Earth. How will she convince the other students that she is normal? How will she survive when a catastrophe occurs and her class is left with no choice but to evacuate the planet? I really liked this book. It was like nothing I read before in a good way. I really liked the characters and the world the author built. The author should know she did a good job and deserves a pat on the back. I really enjoyed the book and the author made one teen really happy. I want to own a copy and I will definitely talk it up to other teens.”

Haley, 17, says, “This is an awesome book about an outcast and how she works to fit in to a society that doesn’t value her. Action-packed and an all out good science fiction read.  I liked how the girl on the main cover represented Jarra, the main character. I liked how she was chained to the Earth, which represented her struggle being stuck on the planet unable to travel the solar system like most people.  The world building, especially how Jarra had a genetic problem that caused her to be stuck on Earth while everyone else can travel to other planets, was one of my favorite parts. I am very excited to hear there will be a sequel! While the first book wrapped up nicely, I didn’t really want Jarra’s story to end."
Also – Janet Edwards quoted us on her website! My teens were so excited to see that! : )
http://janetedwards.com/reviews/


*Thanks to Lisa Michalski at Pyr for including this ARC in the YA Galley Project!*